“Maybe he could grow up to solve climate change. Not as one of the main ones, that’s unrealistic. But in an administrative capacity.” - Mark Corrigan, Peep Show

Introducing my wonderful long-time friend Nick, who (while wonderful) is not in any way a permafrost scientist, enthusiastically agreed to join me on fieldwork a few weeks ago. This was possible thanks to Hanna’s inclusive stance on field assistants, which - to be honest - is the reason I was allowed to go the first time too. We went to the site known as Iskoras where I am doing a little bit of work for my project, and Nick has written for you the first-ever guest blog post, to tell the experience from his own perspective. What people sometimes don’t realise is that ‘permafrost’ is basically an exciting word for ‘cold and boggy’, but I figured Nick likes gardening so pottering about in the mud would probably be up his street. And if not, enthusiasm would carry him through…

A few months ago Sarah asked me whether I fancied going to Northern Norway to help her with some fieldwork there. I have always loved Norway, and had no real idea of what the sort of fieldwork Sarah and her colleagues got up to, so I jumped at the chance.

I spent a few days in Northern Norway on holiday before going to the field site, so had some time to acclimatise to the lack of darkness at night (we were well within the Arctic Circle, so in the summer the sun doesn’t set). While I don’t think my sleep quality was fantastic, it did seem to be the place that my body was so disoriented that I could go to bed and get up at any time without feeling particularly tired. This proved to be quite useful when it came time to do the fieldwork.

The field site was not far from a town called Karasjok. We picked up Hanna in Alta and drove off to Karasjok, a surprisingly long trip, which we can generously blame on the car’s satnav. The landscape was interesting, gradually becoming less intensely hilly as we travelled further south and east, but utterly beautiful, passing eagles, reindeer, and more trees than we could count (although Sarah did try to estimate how many we would see; it was at least a million).

Karasjok itself seemed like an interesting place, with a Sami Cultural Centre and Museum, but we mostly saw the hardware stores and the campsite, where we stayed in a nice little cabin.

The first day we went to the hardware store, to buy as much wood as we could carry over the next few days, and some plumbing pipes. I am not the most practical person in the world, but was keen to show myself as at least practically competent, as I certainly wasn’t there for my excellent knowledge of permafrost. So I sawed the wood down with as much skill as I could muster, and was delighted to find that I was at least as competent as the others.

So, loaded with wood and piping we drove off towards the field site, down bumpier and bumpier roads, above the treeline, and further and further away from civilisation. Then we found a small pile of rocks, which marked the closest place to leave the car, to embark on a 45 minute walk through the wilderness, with as much wood as we could carry. Again, keen to prove myself, I took slightly more than was sensible for such a walk, but I got away with it by unloading some of it onto Sarah. 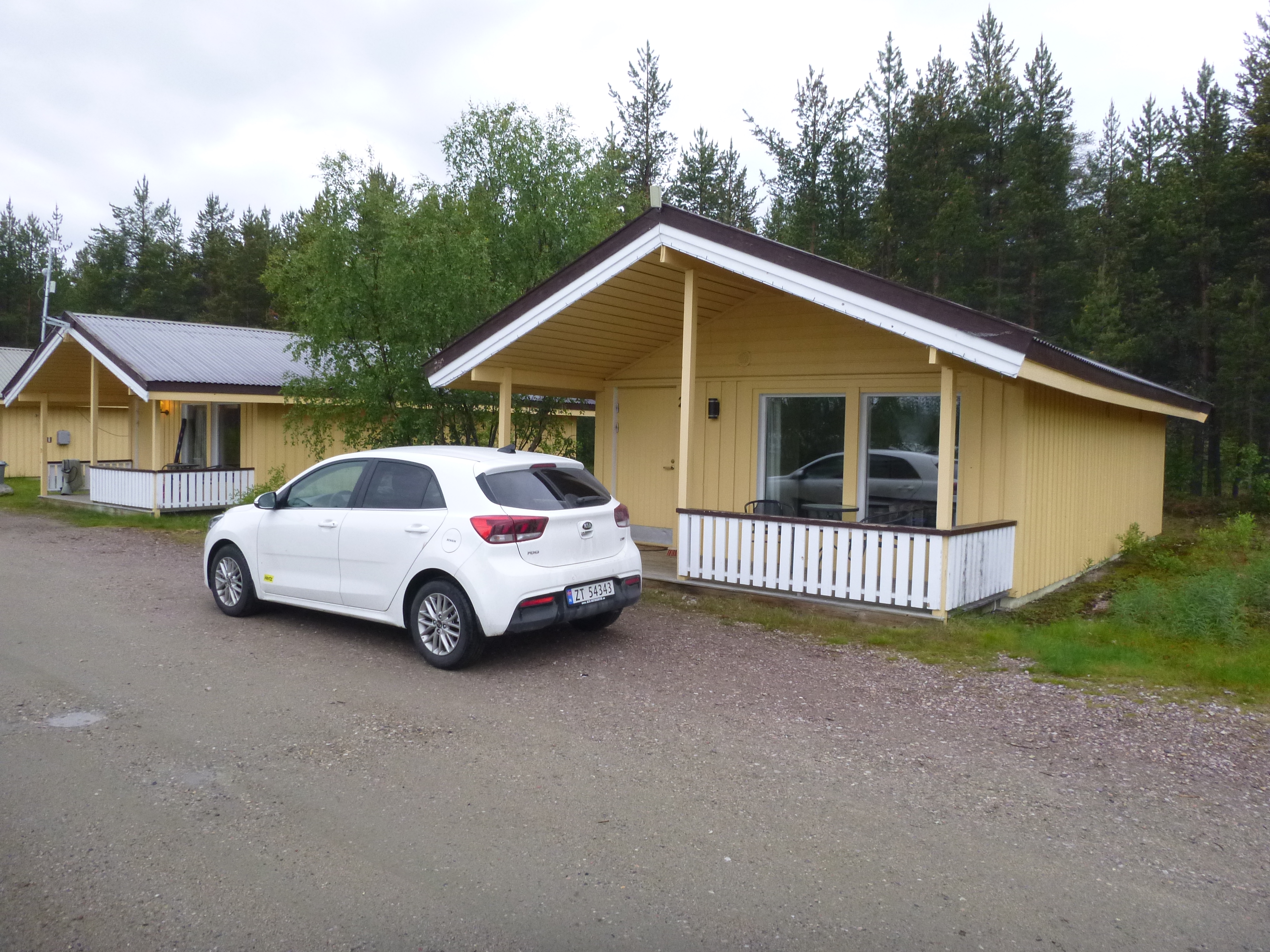 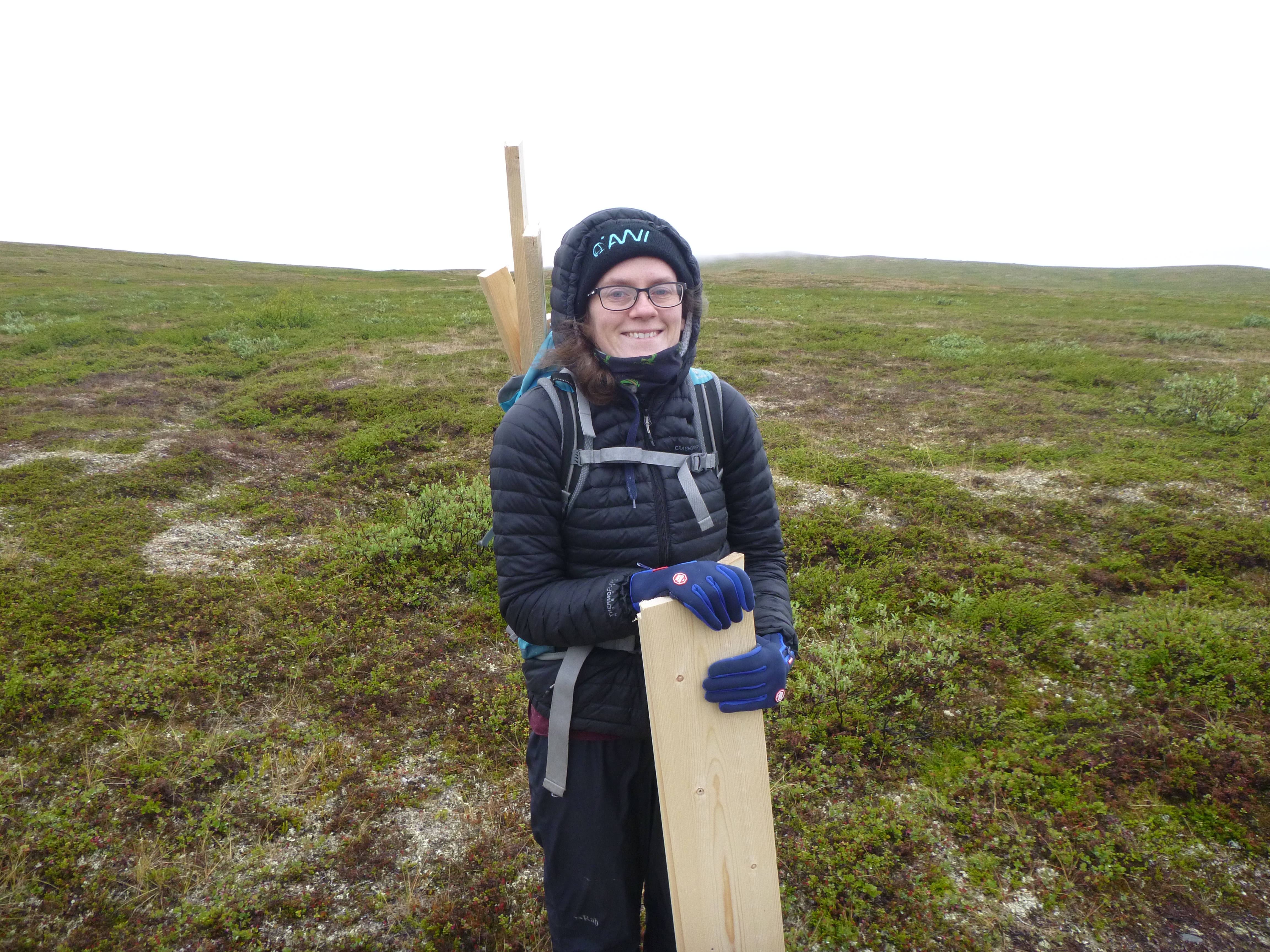 Sarah carrying wood across the tundra.

The field site itself is an odd looking place. It is a “palsa mire”, which is a particular type of bog with bumps sticking out of it, that contain permafrost. While the temperature is too warm to accommodate permafrost in the area i n general, the inside of these bumps stays cold enough all year, thanks to avoiding most of the insulating snow in the winter, and avoiding the warming effect of being waterlogged in the summer. At least, that is the oversimplified gist of it that I can remember.

Palsa mires like these are collapsing quite rapidly with climate change, and scientists at this field site are measuring these processes in detail to better understand exactly what is happening, which can be used to produce more detailed and accurate models of future climate change.

I learned that working in a site like this involves a lot of checking the weather forecast, and deciding what jobs should happen when based on when the weather will be most accommodating. The weather the first day wasn’t great, with grey clouds and some heavy rain showers, so we made it a short day, planning to make full use of the next day’s predicted sunshine.

Most of the work I did that day was labelling small vacuum tubes, which Hanna filled with samples of gas taken from several depths at various different places around the site. I then recorded which tube code came from which place and depth. It was menial work that I found I was quite competent at, and quite enjoyed. After a heavy downpour that forced us to huddle together under a tarpaulin for what seemed like an age, we decided to call it a day.

The next day having the best forecast, we decided to get up at 4:30AM to get to the field site early, and spend a long time there, to get as much as possible done while the weather allowed. I was slightly apprehensive of the plan, but the strangeness of the arctic summer helped enormously, and I found it no more difficult to get up that early, as by this point in the trip my body clock seemed to had given up trying to come up with some sort of circadian rhythm.

While the advantage of the good weather was that we could be out much longer, the disadvantage was that the mosquitoes showed themselves, and were very keen to get involved. Luckily Sarah had warned me that they could be an issue, and I had borrowed a very fetching head net that did a pretty good job of keeping them off my precious face. 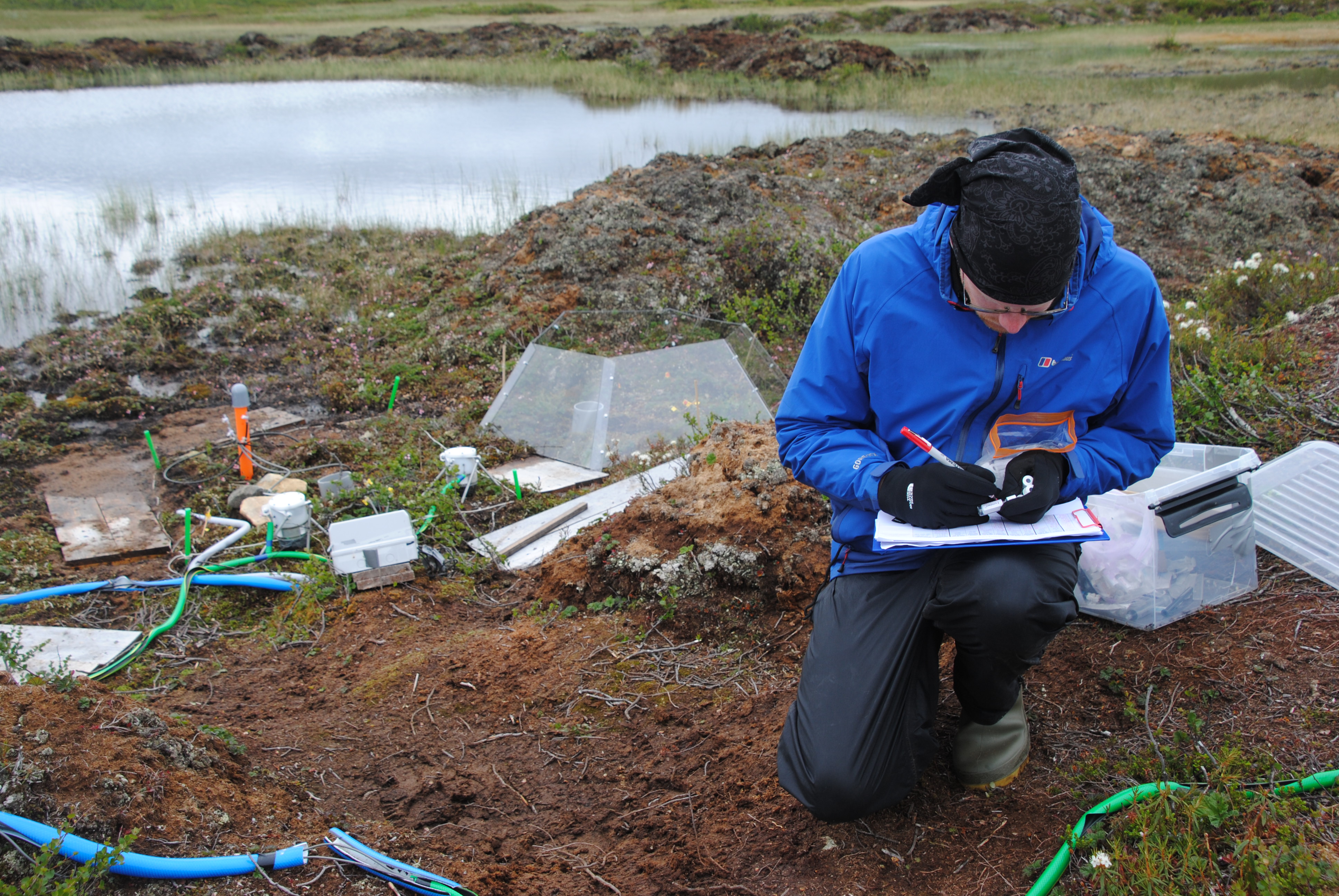 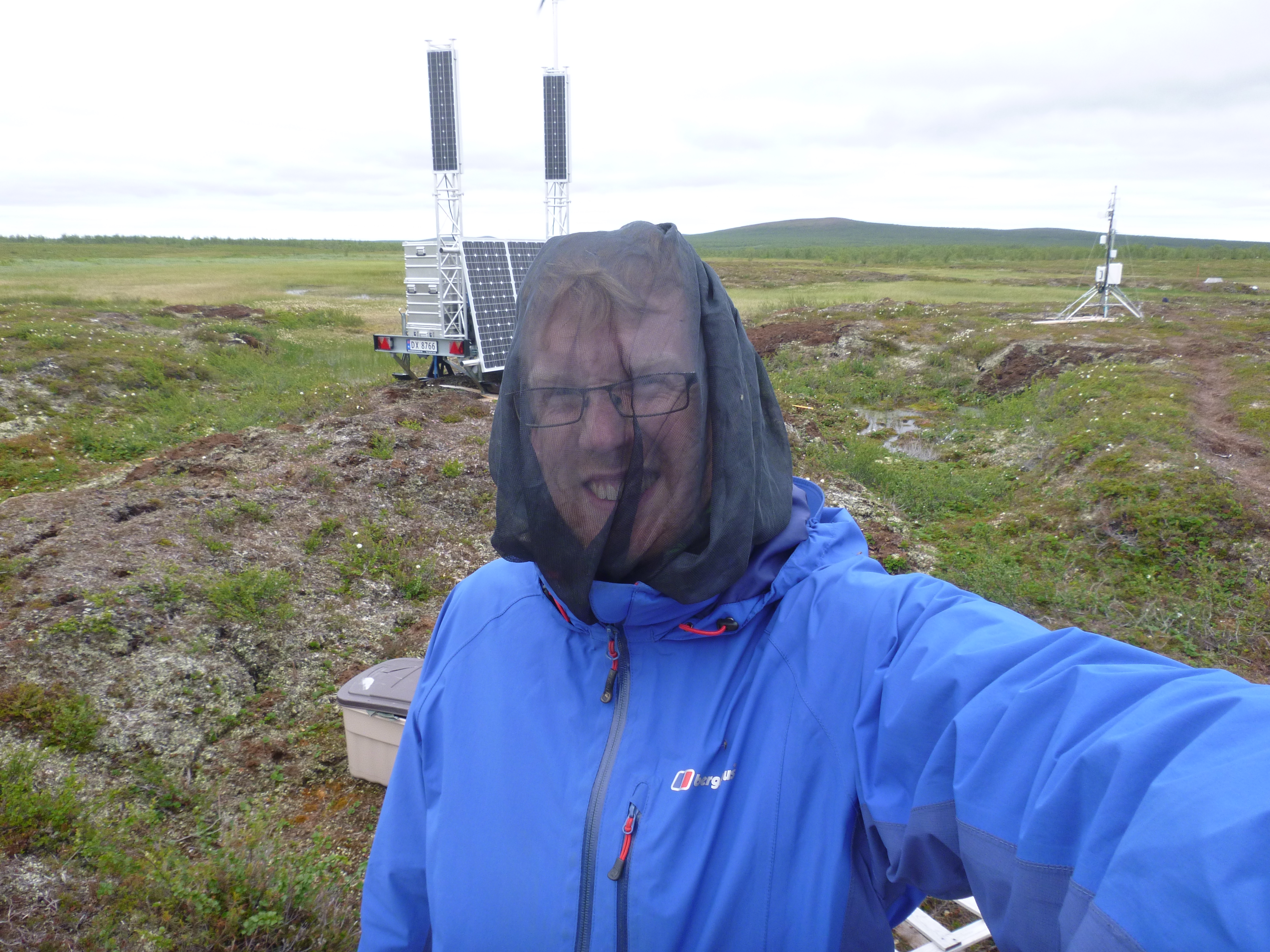 That day Sarah and I did a lot of gas flux measurements, which involved taking gas samples, temperatures, water depths and permafrost depth measurements from many different areas of the site at regular intervals. Sarah did all the measurements, I was again on tube labelling and recording duties. These measurements are used by scientists to better understand how greenhouse gases are produced from different parts of the palsa mire, to see at a more micro level what is going on.

I also started making some more rudimentary boardwalks for the site. Being a palsa mire that is collapsing due to climate change, and which is being very closely and precisely monitored, it is very important to minimise the impact of people on the site by walking all over it. So, particularly in the parts which are the wettest, and most changing, we used boardwalks to distribute the weight and reduce erosion as we worked on the site. This was another job that my minimal competence was well suited for, and I produced a good number of boardwalks that varied in quality from “quite good” to “adequate”.

While the second day was a lot longer, and a lot more mosquito-ridden, it was a lot easier and nicer, thanks to the weather.

We ended up getting so much done on the second day that by the third there was not an enormous amount to do. Well, at least not an enormous amount that somebody with no skills could help out with. I spent the day building more boardwalks, which by this point were ranging from “not bad” to “pretty respectable” in quality. After that, and once Sarah and Hanna had finished whatever tricky measurements they were taking, we went back to the cabin, to play the board game Goa, the first activity in the trip at which I felt fully competent.

The trip, in all, was great. I learned a lot about palsa mires, a lot about the practicalities of fieldwork, and skilled up from “barely competent” to “passing competence” in the noble arts of sawing and drilling wood. I feel very lucky to have shared a few days in such an interesting place, with such great people.